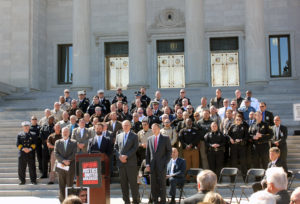 Arkansas’ counties and cities have joined together to file a first-of-its kind, unique opioid lawsuit. Rainwater, Holt & Sexton initiated this concept and put together the team of lawyers representing the counties and cities. The suit names 52 drug companies and 13 other distributors, pharmacists, and retailers … all to hold the companies responsible for the cost of addressing and fixing the Arkansas opioid epidemic.

Opioids are tearing Arkansas families apart. Opioids are an overwhelming financial burden being imposed on Arkansas counties and cities. The suit alleges the defendants “falsely touted the benefits of long-term opioid use, including the supposed ability of opioids to improve function and quality of life, even though there was no ‘good evidence’ to support their claims.” Because the opioid drugs were marketed as beneficial for the successful treatment of chronic pain, they were prescribed at a very high rate in Arkansas.

The problem is opioids quickly create a physical dependency upon the drugs. In 2016, over 235 million opioid pills were sold in Arkansas. That’s enough for everyone in Arkansas, both children and adults, to take 80 pills per year. The high dosage rate turned in to 335 opioid-related Arkansas overdose deaths in 2016.

For every overdose death there are countless other near-death health issues. Enormous financial strain is added to the normal local and county healthcare systems – both hospitals and first responders. Financial strain on local government flows from the needed local law enforcement agency response on the street. Crime is associated with drug supply. This causes rising jail populations and even more financial strain on local government. On top of all this, there is the need to provide expensive life-saving antidotes, like Naloxone.

The lawsuit is for the people of Arkansas, asking the defendants to be held financially responsible for the financial cost of the opioid epidemic and the financial cost of creating a system to wean opioid dependent people off the dangerous and life-ruining drugs. The lawsuit asks the court to hold the defendants responsible for helping the cities and counties recoup these costs and to pay the money to treat those now dependent upon the pills. Time is of the essence. People are dying. Rainwater Holt & Sexton is working to get the needed relief so the problem does not persist and so more people will live a life without these evil drugs.

Rainwater, Holt & Sexton has been involved in the litigation since the beginning. As the opioid problem became more and more evident in Arkansas Mike Rainwater knew he was in unique spot to help. Since Rainwater, Holt & Sexton represents a majority of the Arkansas counties and works so closely with the Arkansas Association of Counties (AAC) the relationships were there to start a cooperative suit. As Rainwater began to build the litigation team and the AAC brought counties on board, the suit took shape. Additionally the Arkansas Municipal League was brought on board to represent and recruit cities to the lawsuit. The suit has been filed and over 70 Arkansas counties and over 200 Arkansas cities have signed on for the case to proceed. Rainwater, Holt & Sexton is excited to be a part of the litigation team working to remedy the opioid problem in Arkansas.